Business, Community Leaders Testify to Importance of Getting Ex-Offenders Back Into Society 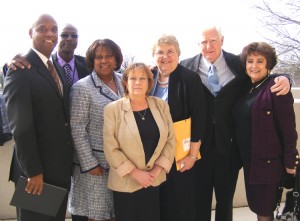 To the outside world, Barbara Harrison had it all together: A good job in the real estate industry and a stable family life.

But some unfortunate choices led her down a path of drug addiction and into the firm grip of incarceration.

“It got to the point that I could not deal with myself any more,” Harrison told a crowd of several hundred at the April 4 “Second Chance Breakfast” sponsored by Offender Aid & Restoration (OAR).

By the time she arrived at OAR’s doors to seek help, “I was frustrated, angry and unable to find a job,” she said at the forum, held at the Sheraton Pentagon City Hotel.

Harrison’s decision to seek help led to new employment . . . and a new perspective.

“OAR has saved my life in more ways than one,” she said. “They reach out – the biggest thing is, they really listen. They extend their arms.”

Founded in 1974, Offender Aid & Restoration works in Arlington, Alexandria and Falls Church with support programs for those in jail and prison, and assistance when they return to life outside a cell. The recidivism rate among OAR clients is 8 percent, far below the national percentage.

“It’s a tough road,” acknowledged Gail Arnall, the organization’s executive director. “Most of our clients simply have no one. When they’re ready, we’re ready to help them make the transition. Support is critical.”

The annual breakfast fund-raiser drew a heavy turnout from elected officials and law-enforcement personnel, as well as Harold Clarke, director of the Virginia Department of Corrections.

U.S. Rep. Jim Moran (D-8th) noted that one in 31 Americans is in prison or jail, or on probation or parole.

“Many communities would just as soon turn their backs on them,” Moran said. “This community has empathy – we don’t turn our backs on our fellow citizens, we embrace them.”

Perhaps the most important support needed for those coming out of incarceration is a job, and OAR’s event spotlighted several local companies that are willing to hire those with criminal records.

Among the firms saluted was Miller & Long Concrete Construction, which for the past eight years has lent a hand to those coming out of the criminal-justice system. About 100 ex-offenders are part of the organization’s 2,500-member workforce.

“It is hard, it is challenging, but it’s the right thing to do,” said Otto Girr, a vice president at the firm. “People do deserve a second chance. God reminds me every day how fortunate I am; it’s important to pass on those blessings.”

Honored at the ceremony was Judge Karen Henenberg, who is retiring after service on the General District Court. Also saluted was Gov. McDonnell, for efforts during his term in office to support ex-offenders and those who support them.

In a video message from Richmond, McDonnell said he has pressed for effective re-entry programs for offenders. “OAR has been a big part of this initiative – OAR is making a big difference in the lives of its clients,” the governor said.

Mondré Kornegay, who chairs the OAR board of directors, said the non-profit’s client load of 2,000 so far this year is up 7 percent from a year before. She pressed for a commitment to “restore lives and keep our community safe.”

Arnall said OAR’s goals for the near term include the hiring of a family-relations specialist, establishment of a permanent presence in Alexandria and building relationships with the business community. The annual Second Chance Breakfast brings in about $85,000 to support the organization’s goals.

For information, see the Web site at www.oaronline.org.

Originally published in the Sun Gazette on April 5, 2013. Original article can be found athttp://www.sungazette.net/arlington/news/business-community-leaders-testify-to-importance-of-getting-ex-offenders/article_72164b66-9ddf-11e2-bdd7-001a4bcf887a.html#user-comment-area